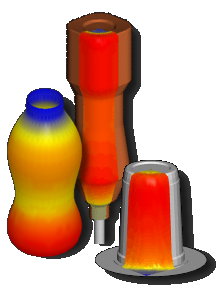 T-SIM is able to pre-distort images for printing them on the flat sheet, so that once thermoformed, the images appear true. T-SIM can also predict deformation of an image printed on flat sheet. Below there are examples of image pre-distortion simulation in T-SIM.

The example video of multiple image pre-distortion is here for better understanding.

The illustrative example video of VRML image pre-distortion is here in two animations.

This T-SIM feature enables image distortion / pre-distortion with a precise location of an image represented by its outlines. The image outlines must be represented by lines or polylines and saved as an IGES file. T-SIM reads the IGES file and project the lines and polylines onto deformed or flat sheet. The projected lines/polylines can be distorted/pre-distorted just by selecting the last/first simulation record. Then IGES export generates an IGES file with the distorted/pre-distorted image outlines.

After T-SIM installation there is an example called Phone in the T-SIM directory. Open this example - click Post Processing and open file Phone.tfc located in the folder \Phone. Once the project is loaded, click on View / Image mode. In Image mode, select IGES / Project IGES. Select the IGES file ImageOrig. Igs delivered with T-SIM and click Open. The image outlines (polylines) are automatically projected:

Now for example to select the record 1 to see the pre-distorted image:

The following animations show deformation of the pre-distorted image: